A Year with iPhone

A year ago, page after page of ink was spilled by prophets of doom fretting about the iPhone and how it would surely not be as good as this or that other phone. It doesn’t have a keyboard! It can’t do voice over IP calls for really cheap international calling! It isn’t open enough to allow Quake to be installed on it! Oh, the humanity! A year later, were the critics right?

Some of the criticisms, no doubt, were legitimate. At the time of launch, the forthcoming iTunes App Store was merely a dream amongst those not privy to any plans about it that might have already existed in Apple’s most closely guarded recesses. Custom ringtones of any sort were not possible. A new type of device was being birthed and imperfections existed.

A year later, those types of critiques have been solved. The key one that remains is the issue of openness, and I will admit that I would be pleased if the iPhone was made more open. If, for example, the iPhone accepted third party apps without getting them in a DRM protected form that would be dandy. If it came in an unlocked form, that would be splendid. If they gave it away for free and a full sized QWERTY keyboard sprang out of the bottom that would be swell. If it delivered a hot cup of coffee to my bed when my alarm went off, who wouldn’t love that?

The problem with all of these critiques, which, if considered in isolation from the positives of the iPhone, might sound like major marks against the product, is that they all yearn for a mythical device rather than pointing to real alternatives. Alchemy would be great too, if it worked.

What the naysayers always miss is that the iPhone made the things it was suppose to do practical and easy to do, many of them for the first time. I used mobile web functionality only for a few very specific tasks on my old phones, including a Symbian smart phone, because surfing the web on a mobile phone was exasperating. One was either stuck with oversized web pages of which one could see a very small bit and had to scroll constantly, or one could use stripped down mobile alternatives (when they existed).

Contrarily, the iPhone placed a desktop quality web browser on its device with one extremely important feature: intelligent zooming. Instead of starting out viewing a page meant to be displayed on a screen at least several orders of magnitude larger at 100%, the iPhone zooms out to offer the “lay of the land.” This eliminates most scrolling right off the bat. More critically, the heavily publicized finger gestures make it as simple as a double tap on a given block of content to zoom in to just the right size to read that column of text with no horizontal scrolling necessary. I finally enjoyed using a mobile device as a web access point. 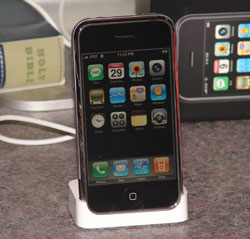 On launch day last year, I intended to sit it out, but when curiosity got the best of me and a relatively quiet AT&T store beckoned to come in and play with the demo unit, it was love at first sight. Immediately I could tell that the hype about the multi-touch screen and desktop class web browser were not just hype.I brought one home.

Some features completely changed how we expected to interact with phone functionality. For example, Visual Voicemail is a feature immediately appreciated by anyone who has ever listened to voicemail after voicemail drone on while waiting for the very last one, which, of course, is always the most important one.

These are the sorts of features that made millions of people go buy iPhone 1.0 over the last year. Two price drops and an impending 3G model later, I really have no regrets. All those “if only’s,” many of which will be answered in just a few weeks, can lead one to miss this point.

Not every device needs to be a full-fledged computing platform capable of complete customization to be good at its given task. My cordless phone has never had an OS update and I have not found myself frustrated that it lacks an AOL Instant Messenger client. The chant of “but iPhone doesn’t do this thing that my hackable Linux phone does” overlooks the more common sorts of tasks mentioned above that these iPhone-killer phones fall flat on.

That the iPhone is now going further towards an even more exciting frontier of being a full fledged mobile platform should not cause one to overlook that in this first year of iPhone usage, Steve Jobs’s latest pride and joy has already managed to do things – like mobile web browsing – exceedingly well while the constant litany of “better” devices struggled to catch up. Happy Birthday, iPhone, congratulations on a job well done.

I’m still criticized by one of my fellow employees for “overpaying” as an early adopter. Keep in mind, this guy doesn’t even own a cell phone. When I first activated my iPhone last June, I truly felt like I was holding an artifact from the future in my hand. A year later, I’ve yet to see another device that gives me that same feeling of awe and wonder. For a technology enthusiast, the iPhone is a one of a kind device, yet to be matched in total quality by competitors. It’s the electronic equivalent of fine wine. It’s Benihana to Wong’s Wok. Whoever said money can’t buy happiness doesn’t have an iPhone.

Spelling. - “This eliminates most scrolling right of the bat.”

Well, Certainly you never use other smartphone outside. I saw iphone, but still wont be able to replace my nokia e90. Fine wine? I guess you just have not look around much.

I got one the week after launch. I am still amazed at how much Apple got right on the first try that others still fail to get right after many years of experience. The iPhone is the first “smart” phone I have owned that is consistently a pleasure to use. All the other ones I hated so much I returned them and stuck with my RAZR. I had to buy the iPhone with my own money, but it was worth it. One year later, the iPhone is accepted at my workplace which will buy my 3g one when it comes out. My old one that has gone everywhere with me is still in pristine condition, so I will give it to my dad.

The iPhone has been excellent from day one, and it will be even better with the new hardware and software.