Buzzing About the Neat Worker Bee

A High Quality and Affordable Microphone

My work has become highly dependent on live streaming since COVID hit. I wanted a good quality microphone to improve live stream quality without breaking the bank. I found a lot of options that were of uncertain quality, but affordable, and plenty of well known quality with a price to match. Then, I found something neat: the Neat Worker Bee.

Neat may not be as well known of a brand as competitors such as Blue, but the company was, until just recently, a subsidiary of legendary guitar company Gibson. It is now owned by long time computer audio brand Turtle Beach, but remains helmed by the founding leadership team that created its quirky line of microphones.

I initially bought Neat’s very affordable Widget A USB mic on a whim and was, and am, highly impressed with it for what it is. The Widget, which comes in a few different designs that vary only in appearance, beat much more expensive mics I experimented with and added a dash of fun to my desk at the same time. Though I’ve seen the price fluctuate a good deal, I managed to pick it up for just $29. It is a seriously good microphone and if you are OK with a microphone with zero adjustments and a somewhat bulky — but, fun! — design, I highly commend it.

For myself, the Widget was almost perfect, but missed on a few minor points. I wanted something I could route through a soundboard for more control, such as the ability to apply a high pass filter. I also wanted something I could mount on a boom pole, so I could position it as close to me as possible without being visible on camera, providing that “I’m just in my office chatting with you” look I wanted for live streaming.

Most recommendations I received for a good microphone for recording were at least twice as much as the Neat Worker Bee. I have no doubt they sound great; I’ve heard some of the results from them and they are great microphones. But, the Worker Bee is like a hidden treasure, offering incredibly great sound for a lot less money. The Widget A is way too good for a microphone of its price point and the Worker Bee continues the trend at a still reasonable $89 street price. It originally sold for about twice what it goes for now and even at that, I would say it is an excellent microphone.

Neat’s fanciful design language influences everything inside the box, which includes a manual with a delightful running metaphor of being instructions for keeping bees; a handy storage crate; the colorful “Bee Keeper” shock mount; a fun, abstract bee statue that has a copy of the serial number on it and, of course, the microphone itself. Don’t let the fancifulness fool you, however, this is a really fine quality microphone.

We use a lot of the excellent Shure SM58’s in ministry and, to my ears, it sounds better than those deservedly omnipresent microphones. Also, as a condenser mic, it is far better suited to a project like live streaming than the SM58.

The cardioid pattern — primarily picking up sound in front of the mic instead of all around it — is just about right, wide enough to be forgiving of me when I turn my head back and forth while having the main thrust of its sensitivity aimed at where I am usually facing. The quality of the sound is crisp and clean; it easily compares to the higher end Shure Beta 87A’s some of the podcasters I enjoy use. I am always annoyed hearing my own voice, but perhaps less so with the Worker Bee than any mic I have ever heard before.

I did have to exchange the first Worker Bee I received. It sounded great, but its volume output level was far too low. Every microphone has a “noise floor,” the base level of noise that gets mixed in with what you actually want to record, but you want that noise floor to be as low as possible, ideally by what you are trying to record coming into the microphone at a much higher level than the said noise so that, by the time you mix the end result, the noise is practically non-existent.

Unfortunately on that first Bee, the “buzz,” so to speak, was definitely too high in comparison to my voice. The good news is that appears to have been a fluke. I can crank the gain up on the replacement, making it very sensitive to what I’m saying into it, back down the channel volume a lot and put the output volume on the board to -18db (considered ideal by people who know far more about this stuff than me) and get an excellent audio feed into my streaming software, OBS. 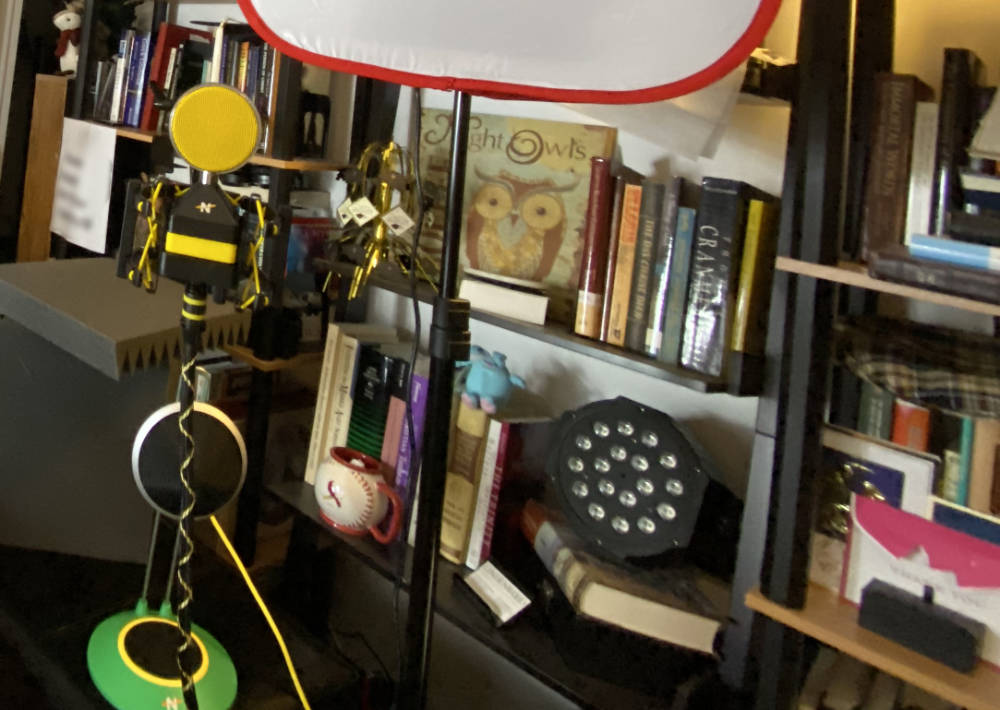 Meet the Neats: Setting up the Widget and the Worker Bee for testing.

The Bee Keeper shock mount works well, though the Worker Bee fits in it so snuggly that it is sometimes hard to get it out. The (sold separately) Bee Line XLR cable isn’t necessary, but is a reasonably priced, very well made cable that compliments the fun character of the microphone with its subtle yellow accents. I know some people don’t like Neat’s colorful design of its microphones, but I think it is a nice change of pace over the more staid microphones one normally might use. It is just the right amount of fanciful without being silly.

If you are like me and just taking steps deeper into the audio world, I should provide one word of caution. I’ve tested some really cheap condenser mics that somehow mostly work without what is known as phantom power from the sound board they plug into. This is not such a mic. Phantom power, for the uninitiated like me, is the way a sound board can power a mic (usually of the condenser variety), that require a power source in order to function. Turning off phantom power to the Worker Bee (or attempting to use it with a board that does not offer phantom power) is essentially equivalent to muting it. If you’re upgrading from one of those low-end options where you did not need phantom power, make sure your soundboard can provide 48v of that power before you leap.

How could the Worker Bee be better? That’s an easy one: I wish it had a high pass filter built in. I bought a separate Shure one that works when a soundboard lacks an integrated one, but that adds another $50 or so onto the mic. The good news with this mic is that it is very sensitive to sound, but that’s also the bad news when you have noises such as the whirl of computer fans anywhere within its “reach.” A high pass filter helps alleviate those sounds, but it is a shame Neat didn’t opt for a slightly higher price in order to include one out of the hive.

That caveat aside, this is a really nice microphone and I highly commend it for those who, like me, suddenly find themselves thrust into the serious live streaming or podcasting world (Neat Microphone; $87.99 on B&H).