The K2 sports an understated elegance on my desktop.

So Close, I Wish It Were Perfect

I’ve been on the quest for the perfect keyboard for a while. What I want is relatively simple, if hard to find: a mechanical keyboard that is oriented towards writing, not gaming. My match would be reasonably compact and friendly towards Macs, too. Keychron, as much as anyone, has arisen as one of the few companies interested in ticking those boxes.

This is the first in a TestyTim.com series of reviews on mechanical keyboards that will also include boards from Epomaker, Royal Kludge and LoFree. You can read more in the review series overview.

Mechanical keyboards have long been the gold standard, far superior to the mushy typing experience most of us have grown accustomed to. The superior, tactile nature of an actual mechanical switch moving below your fingertips improves typing speed and helps reduce stress injuries.

A somewhat less common, but clearly superior keyboard seems like a perfect companion to a computer — a Mac — recognized as having the very same sorts of discerning characteristics. Yes, mechanical switches are preferred by gamers, but they are also the superior option for writers and, well, anyone who uses a keyboard a lot. The Mac may not be the gaming center of the universe, but we fruity computer users are willing to go out of our way to find the better thing, so why ignore us?

The Keychron was one of the first companies that seemed to hear the plea and answer it. The Keychron K2, in my estimation, is their most intriguing answer.

The K2’s size is just about perfect for anyone who finds the size of an average laptop keyboard — including MacBooks — agreeable. It dumps the numpad to free up more of my desk, but doesn’t overdo the downsizing like so-called 60% boards do. They often drop keys I depend on for writing and editing, such as the arrow keys.

Many smaller options also end up with at least a few keys in non-traditional locations, slowing my touch typing. The K2 is perfect on this count, making it easy to go from my MacBook Pro’s keyboard to it and back again without having to recondition where my fingers go to do things. Mac friendly multimedia keys are also where you’d expect, which is nice and not necessarily a given on mechanical boards. I am not sure how I lived without volume and mute keys on my keyboard for so many years, but those years are a distant memory.

A video companion to this review with a few updated details, including information about the upcoming Keychron K8 Pro.

Like many popular mechanical board makers, Keychron offers its models in a variety of switch types. I opted for “Blue” switches, which have a satisfying clicky action perfect for serious typing.

Why call clicky switches “Blues”? Switch colors bear the names of the actual colors of different switch models that Cherry, long the standard bearer of mechanical switches outside of the IBM/Unicomp buckling spring, created decades ago. Keychron uses Gateron switches, rather than Cherrys, but I have no complaints on the switch (pun intended).

Gateron has gained a very good reptuation for long lasting switches in their own right, so I’m not particularly worried about the keyboard wearing out too quickly due to the non-Cherry switches. Most Keychron models are what is known as hot swappable, so even if one switch would fail, it can be popped out and replaced without soldiering. The same goes if one decides to change from, say, clicky Blue switches to Browns, Reds or the much rarer, but interesting Clears.

While the K2’s case is a somewhat thin, plastic-y affair, the keyboard seems reasonably stiff — no distracting flex or creaking occurred as I typed this article or others.

Of course, one of the most noticeable — and important — parts of a keyboard is the set of keycaps that sits on top of the switches. Have I mentioned that too many manufacturers focus on gamers? (I’m not bitter or anything.) One of the ways that fixation on gamers often plays out is by placing a gaudy (read: downright ugly) set of caps on the board that look entirely out of place in an office or study setting. As someone who loves good typography, the printed legends on many mechanical boards drive me crazy for their sheer tastelessness. 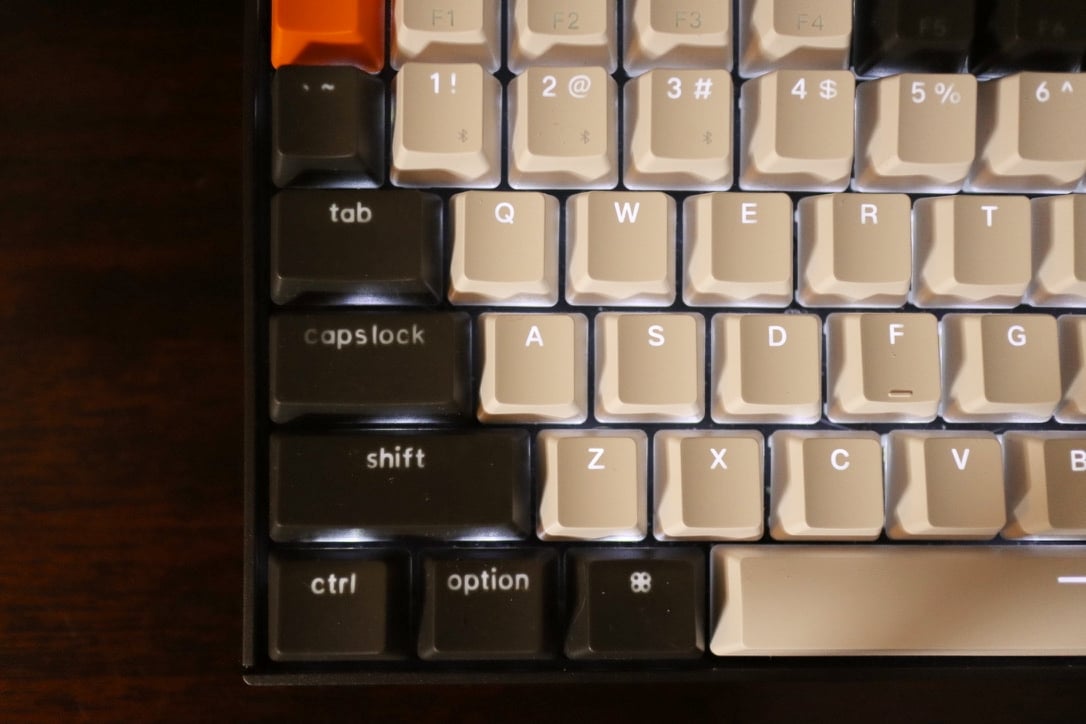 The contrasting white and black keys are tastefully illuminated in a way that is neither overly playful nor stodgy. (Credit: T. Butler)

The K2 v2 has a tasteful, piano-like theme to its keys. Stark white alphanumeric keys are paired with black function keys for clean appearance that is neither generic nor kitschy. Most Keychron boards are backlit; I opted for the white-light only board whose light really accentuates the contrasting color of the keys and makes all the legends quite legible when lit. The keys are doubleshot with the actual key legends made of a translucent material, allowing them to light up with the backlight, much like a MacBook keyboard.

One small downside: the black keys do become hard to read if the backlight is turned off, since the labels are transparent, not translucent white ala the MacBook.

While most keyboards will work on virtually any modern computer (or smartphone, for that matter) with the right adapters or Bluetooth, Mac friendly keyboards like the K2 distinguish themselves by having a simple way to adjust for differences in layout. For example, the difference with Macs isn’t merely a difference in labeling “Alt” and “Windows” keys as “Option” and “Command;” the actual code sent by the keyboard for those keys is reversed. Use a keyboard that doesn’t have a Mac mode and it’ll play havoc with your muscle memory if you use keyboard shortcuts.

Even some keyboards with a Mac mode — Royal Kludge boards come to mind — lack matching Mac legends on each key. The Keychron is genuinely Mac friendly, including properly marked keycaps and the Mac mode to make them work properly. It even comes out of the box oriented towards the Mac, although Windows-friendly keycaps are included in the box for those so inclined.

The keyboard charges (or functions in wired keyboard mode) through a USB-C port that fits well with a modern Mac or PC, although the included cable is a USB-C to the classic USB-A. You’ll need to pick up a USB-C to USB-C cable or adapt the included one if your computer lacks older style USB ports. 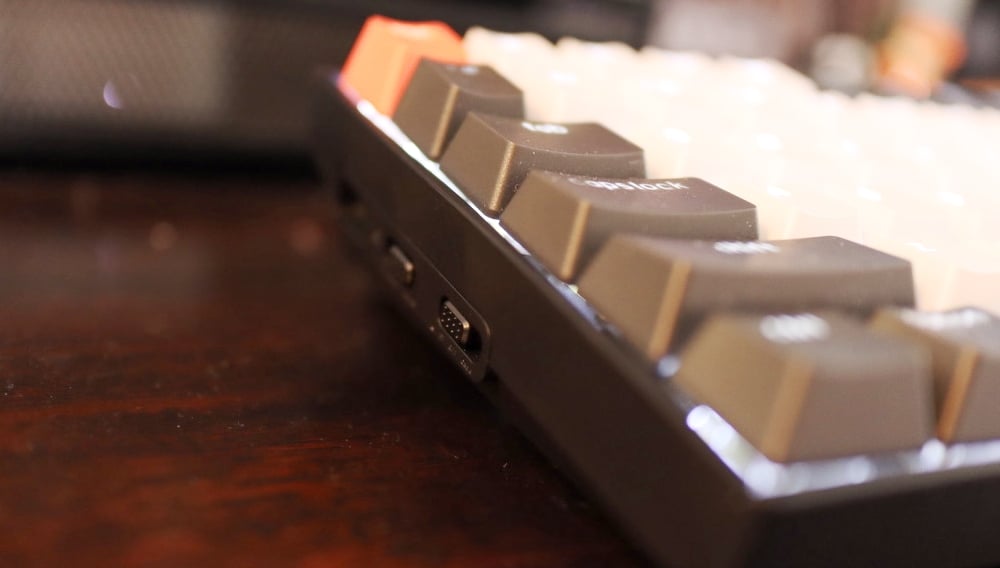 There is so much to like here, I hate to say it, but there’s a disappointing side to these keycaps and hence the board as a package. Unlike many similarly priced boards — including Epomaker models that I will be reviewing shortly — Keychron uses low-end ABS plastic for the keycaps rather than PBT.

The difference is two-fold: noticeably right up front, the ABS keycaps are relatively thin and make for a more hollow feeling as you type than a similarly equipped board using sturdier PBT keycaps. Worse, over time, ABS keycaps become shiny and slick — something anyone who has used a lower end keyboard for years on end is familiar with. While my Keychron board hasn’t yet shown signs of that all too familiar wear, users report it showing up within the first year of heavy use and that will degrade both its touch typing and aesthetic appeal.

Like most mechanical boards, the keycaps on the K2, easily replaceable, and Keychron makes several promising looking PBT sets, but doing so hoists up the price of the keyboard by another half century mark — putting it in a much more rarified strata of competitors. You also lose the charm of the lit key legends, unfortunately. But for a single limited run that is long sold out, none of Keychron’s PBT caps are “shine through,” third party options often don’t fit perfectly and I’ve yet to find a third party, shine through, Mac-oriented option.

While some people have critiqued the height of the Keychron design, I like its markedly slanted stance. The board uses so-called OEM-profile keys where each row is a bit higher than the last (think stadium style seating for your keyboard) and then includes sturdy, two position, flip down feet that add further height. A nice wrist rest can make a good accessory, but even without, I found it comfortable.

If there’s one other issue I have with this keyboard that I really do find quite close to my ideal in so many ways, it’s that the battery life and management is disappointing. Even on a video conferencing heavy week where I did very little typing, it was a struggle to nudge the keyboard through an entire week without having to reach for its charging cable.

Tacitly acknowledging its weakness here, the keyboard quickly goes into a deep sleep when it isn’t being used and takes what feels like an eternity to wake back up. Wake is glacially slow. I could easily type a sentence or more before the first key press that actually counts for anything.

As you can probably tell, I’m something of two minds on this keyboard. The K2 is comfortable to type on, is Mac-friendly and tasteful in a professional, minimalistic way. Its price tag is well situated in the middle tier of mechanical keyboards, no more than high end, non-mechanical options. The moment I first saw it, I wanted it to be the keyboard that I typed on. 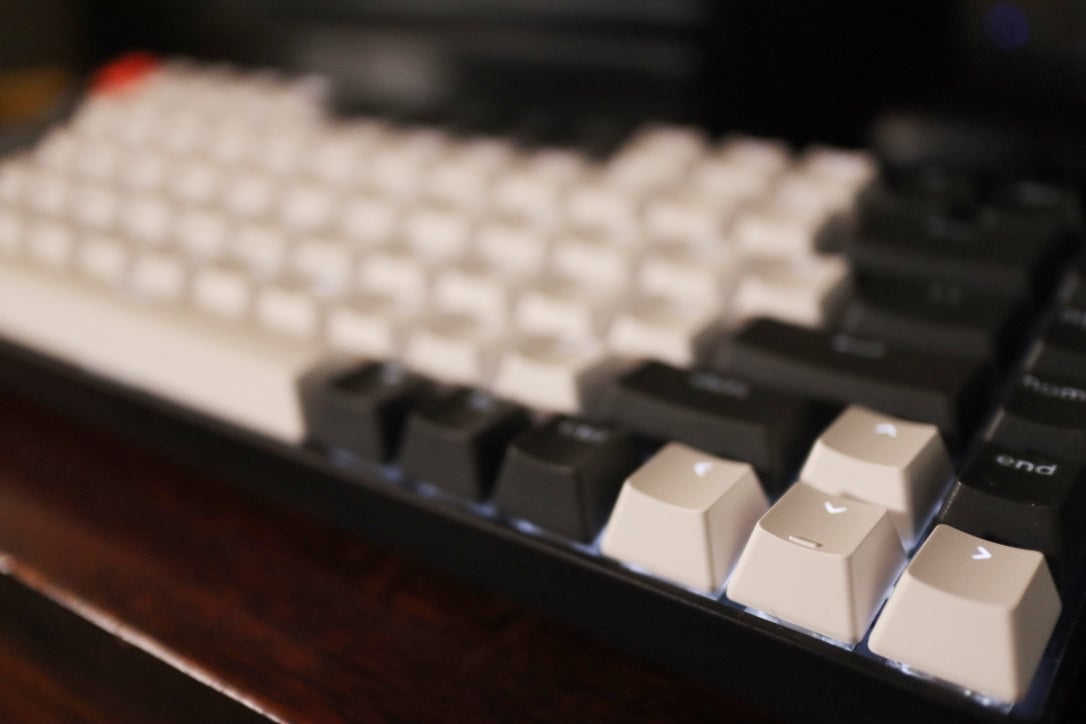 Oh, glorious arrow keys. A bit of time on a 60% keyboard reminded me of how much I use them. (Credit: T. Butler)

It is just haunted with a couple of “if only’s.” If only it had PBT keycaps — ideally that were just as nice looking as the default caps — for better wear over time and better typing all the time with the tell-tale satisfying “thunk” such caps give. If only its charge ran longer and it woke from sleep faster, so that battery management wasn’t so obtrusive.

If only… The K2 would be quite near perfect.

Is it perfect enough for you? If you can live with those shortcomings, you’ll take home a sturdy keyboard that types well and looks nice both at home and office. Even with the shortcomings, few boards get as much right as the K2 does for its price (Keychron K2 v. 2, $79.99 as tested, www.keychron.com).