The GK68XS is stylishly simple in a world of gaudy mechanical keyboards. (Credit: Timothy R. Butler)

I shared last week the start of my quest for the perfect keyboard, stopping by the well designed, aesthetically pleasing Keychron’s K2. While less visible than Keychron, Epomaker has emerged as another major purveyor of keyboards suitable for more than just gamers, including the GK68XS — an intriguing board that ticks off a lot of quality boxes.

This is the second in a TestyTim.com series of reviews on mechanical keyboards that will also include boards from Keychron, Royal Kludge and LoFree. You can read more in the review series overview.

If you are unfamiliar with mechanical keyboards, you might want to head over to my newly minted keyboard review page, which includes overviews of various aspects of the boards we’re looking at that I won’t necessarily repeat as in-depth here. Long story short: mechanical keyboards are better for serious typing and better for avoiding repetitive stress injuries, though many — unlike the ones I’m reviewing — seem almost soley focused on gamers (since they provide faster response times for rapid fire movement) instead of typing focused folks like myself.

Like Keychron, Epomaker has emerged in no small part due to its successive and successful crowdfunding of boards that eschew the gaudy B-movie sci-fi appearance of many gamer keyboards. Both companies also make a lot of different models, several of which have gotten a lot of attention for gee-whiz new features during those hugely successful crowdfunding campaigns.

Situated somewhere in the middle of Epomaker’s lineup is the unassuming GK68XS, which lacks all that hoopla, but like the K2 ticks off the sorts of boxes a person looking for a keyboard of similar layout to one’s laptop might want.

The comparisons continue down the line; Epomaker is another manufacturer friendly to Mac users. While the GK68XS comes with Windows keys installed, they are easily swapped out for Mac-equivalents included in the box using the (also included) keycap puller. Switch the board into Mac-mode by pressing a key combination and Apple users like myself are good to go.

An exercise in minimalism, Epomaker’s board is — no exaggeration — just keys. There are no switches to change modes, no power button to turn on the wireless mode, no status lights. I initially accidentally ordered the non-wireless variant and spent more time than I’d like to admit trying to no avail to press the key combination (Function plus Spacebar) the documentation said would turn on Bluetooth. The only — and I do mean only — visual cue to distinguish between wireless and non-wireless versions is the “S” on the end of the model number printed on the bottom.

This board measures slightly smaller than the already reasonably small K2, leaving ample desk space. I purchased the plastic encased version, but its plastic isn’t, well, “plastic-y.” Epomaker’s reputation for making sturdy feeling keyboards is well attested to here. The casing is notably thicker than on Keychron’s or Royal Kludge’s boards, and the keys have a delightfully solid feeling. This is old-school plastic that feels like it will last a long time.

With no switches or buttons outside of the actual keys, the whole focus is on the sturdy keycaps, the tastefully unassuming typeface of the legends and the bright (albeit dimmable to your taste and color preference) full color backlighting. The keyboard somehow looks retro and modern at the same time, but in any case, won’t make your boss worry you are logged into Fortnite when you should be busy in Excel. 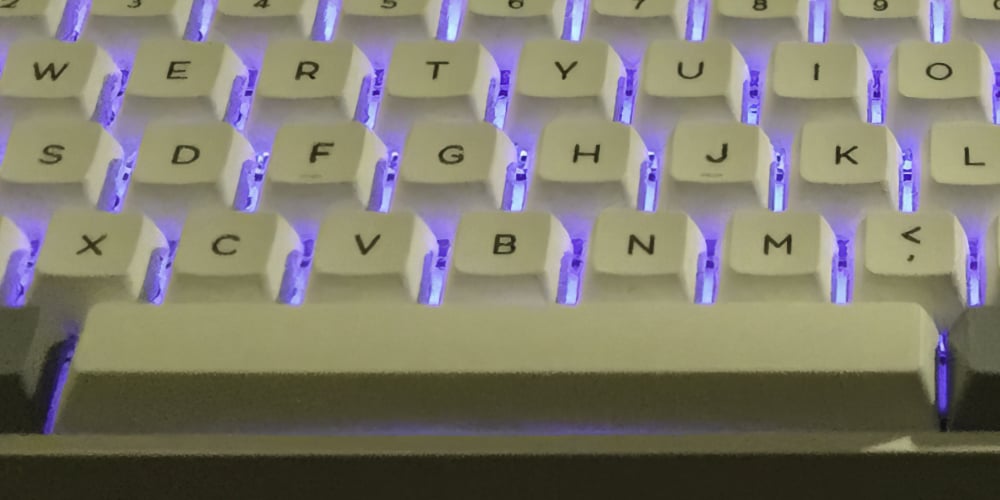 The customizable backlighting can be as bright or dim as you could want; I set it to a pleasant bluish white color. (Credit: Timothy R. Butler)

The keycaps veer away from the more common OEM profile we see on some of the other boards in this series, using a unique “GSA” profile that maintains a largely even key height between rows (more like a laptop keyboard). The keycaps are pleasantly rounded on the edges, also in contrast to more common keys.

To be sure, the GSA profile is different, but my fingers quickly adapted and were absolutely delighted by the solid feel of the keys. Likewise, the thunk-thunk-thunk sound of the solid keys felt reassuringly sturdy — the closest of anything I’ve owned to my venerable IBM Model M. (A delightful keyboard that sits on my shelf since it is too large for my desk and lacks crucial Mac keys I depend on.)

Epomaker’s included keycaps also answer one of my staunchest criticisms of Keychron’s K2: they are made of more robust PBT plastic that will resist wearing. That awful, shiny looking, slick feeling state of worn ABS keycaps is something I am happy to be rid of.

(To be fair, as configured, this Epomaker board is $26 more than the K2 v2, which does help pay for those nicer keys.)

I first encountered Epomaker through an Amazon Lightning Deal on their smaller 60% board, for which I had very low expectations. I was happily surprised the first time I typed on it and the delight continues on this model, whose layout is more agreeable to my “keep the layout like my laptop” needs.

For the Epomaker, I tested it with Gateron Brown Switches (see the overall keyboard review guide for more on Gateron switches). Browns build some resistance as you press, but lack the audible and tactile “click” that intuitively occurs as soon as the key is pressed down enough to register a keypress. Clicky switches such as “Blues” are generally preferred by typists, although the still-not-so-quiet Browns do offer a slightly more muffled sound if you are afraid of annoying a coworker or spouse.

I have heard it said that when in doubt, go Browns, because they are unassuming. That is reasonable advice, but for myself, I’d go Blue switches if I were buying again. That’s no knock (or click) on Epomaker — I picked the configuration and they are more than happy to offer it to you with either of those or several other switch options.

Unlike many of the other similarly priced boards in OFB Labs at the moment, this one is fully programmable, allowing you change what any of the keys do. This can be handy on lesser used keys you might find better assigned to common tasks, for example. The software to make those changes may not win any awards for user interface design (and it isn’t as flexible as QMK found in high end keyboards), but it took me only a few moments to figure out how to make the sort of simple customizations I wanted to make. 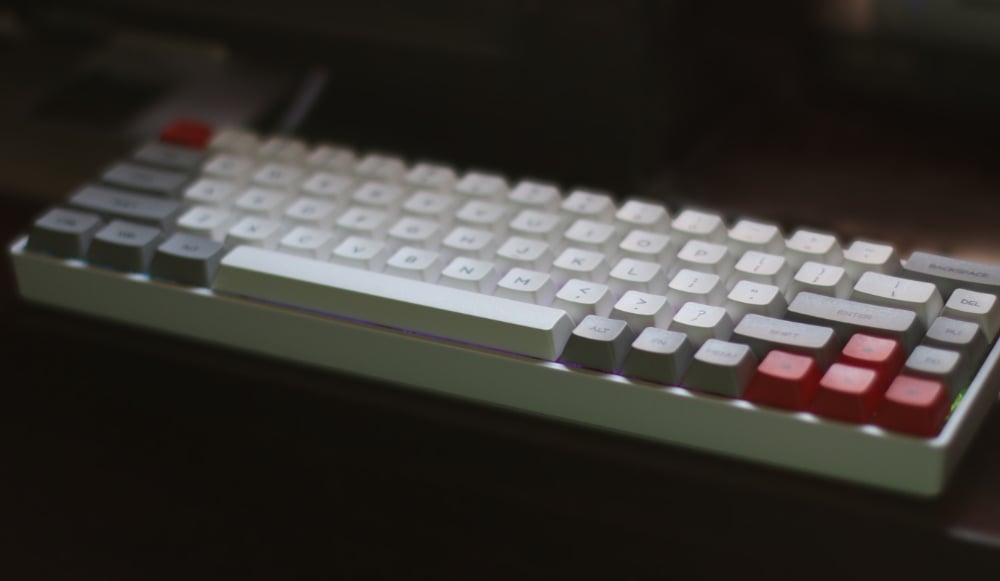 Epomaker’s boards have pleasantly rounded keycaps and a lovely typeface with hints of VAG Rounded that Apple used on its laptops for years. (Credit: Timothy R. Butler)

The software also gives in-depth control over the keyboard’s lighting. Though the otherwise fantastic keycaps (sadly) do not “shine through” like those on a MacBook keyboard or the Keychron K2, the bright, full color lighting shines brightly around the keys, if you want it to. Some basic patterns of lighting can be achieved directly on the board and pretty much any combination you want can be set via the keyboard’s software.

I customized it to an unobtrusive white-ish light in the program, for example.

The keyboard saves to its own memory any customizations made via the software, a nice point that means you don’t have to run yet another program in the background all the time and if you switch between devices you use the keyboard on, the settings go with you. (The keyboard supports linking to multiple devices and has several preset modes — think like the driver presets that customize everything in many cars today — if you want different customizations on different devices.)

When does the other shoe drop on this keyboard? For me, Epomaker offers a pretty great fit for my needs, but it does have a few weaknesses worth mentioning. The biggest one is how it manages everything from turning itself on and off to triggering multimedia controls like volume and play/pause.

I mentioned earlier there are no switches, no buttons beyond the keys themselves, no status lights outside of the backlights. Everything from turning Bluetooth on, to changing from PC to Mac mode, to accessing multimedia controls like play/pause and volume are accessed by function key combinations. That isn’t a huge deal in itself, but is somewhat more challenging given that none of these functions are labeled on the keys — an included cheat sheet describes them.

For commonly used things, like volume, my fingers quickly picked up the locations and I no more need printed legends for those than I do for typing or pressing the well trodden combination to cut and paste. Occasionally used functions are more of a challenge without that muscle memory training and I wish there were printed legends rather than a piece of paper to point them out.

For example: the keyboard came from the factory with the sleep mode disabled entirely, much to my surprise when I left the office for a couple of days and came back to a dead keyboard. My fears that the GK68XS had horrible battery life were allayed when I realized that the poor keyboard had stayed awake — full, bright lighting effects and all — until whatever time it completely drained itself.

A quick visit to the cheat sheet and a Function-key combination later, the keyboard goes to sleep after 5 minutes, instead. But without the cheat sheet, I’d have never figured out what I needed to press to activate a sleep timer.

Speaking of battery life, while the keyboard’s battery life is better than the Keychron K2, it is also somewhat disappointingly short — maybe a week and a half in my average usage. On the other hand, it notably edges out the K2 in how quickly it wakes from sleeping: any wireless keyboard will need to be awakened and thus will fail to register the very first key press you make after it goes into battery saving sleep mode, but the GK68XS wakes quickly beyond that, like one would expect.

These are weaknesses, but ones I have found easy to live with. I can’t say I’ve yet found my perfect board (some of the preorder-only Epomaker models look tantalizingly close to erasing the few criticisms I have on this board), but I can say this one is good enough it has become my daily driver keyboard for the moment (Epomaker GK68XS, $105 as tested, www.epomaker.com).