It's Cheap and It Works

A year ago — pandemic induced video conferencing mania at the center of it — even a bad web cam was hard to come by and often approached the century mark. Now you can get a webcam for eleven bucks. Will it make you look like a million bucks? No, but it’ll get you on that video conference you have to be on without spending a fortune.

2020 was clearly the year of the video conference, but the all-too-familiar grid of faces looks bound to stay with us even when (or if) COVID ever completely departs. With more of us working remotely and general changes to how all of us work and communicate, Zoom and its competitors aren’t going anywhere. If your laptop camera has problems, or you’re like me and spending more time in the home office on a desktop computer, that has meant going web cam shopping.

For awhile last year, even bad web cams could run past $100, but now cameras like this Mosonth camera have gone the other extreme on pricing. When the company reached out to me to give their bargain basement web cam a test drive, I was intrigued to see what you can get with one of the cheapest options available.

At just $11 on Amazon right now (Affiliate Link), this isn’t just an “affordable” web cam, we can officially call it “cheap.” Cheap, but surprisingly thoughtfully designed. The Mosonth web cam comes with two mounting options, an included mini-tripod or a built-in clip for your monitor or laptop screen. It is small enough to easily fit in a briefcase or purse if you need to travel with it.

Aesthetically, the webcam looks more like a tiny square TV of yesteryear than a typical web cam. I like that. Given that most web cams are a bit gaudy and gamer-oriented in appearance, this one is different and even “cute” in a Wall-E sort of way. 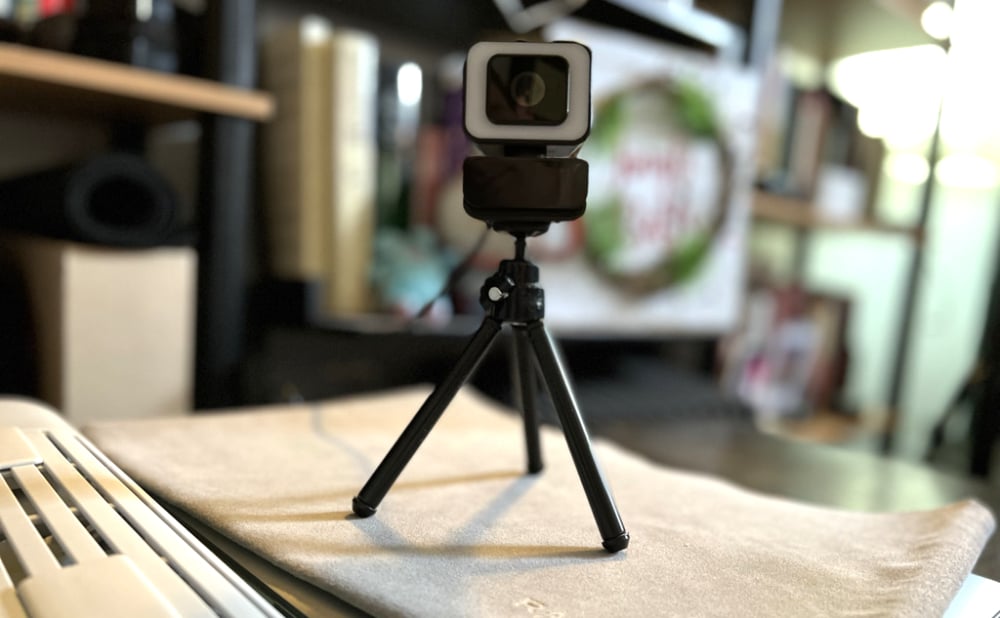 The built in ring light is quite bright for illumination in darker rooms and yet doesn’t give me the “ring light eye” look that can make people look almost alien. Its image quality beats (by a significant margin) the similarly low-end Logitech HD Webcam C270 I recently set up for friends. It has a pretty wide angle lens compared to my MacBook Pro, which is fine, if not ideal for my purposes. For individual video conferencing, I prefer a slightly closer focal length, but it isn’t bad and may suit your purposes quite well. It is good for getting multiple people on camera at the same time without having to try to squish in the frame, for example.

Is it as good as the iPhone’s FaceTime Camera? No, but it is “good enough” in most settings and avoids the messiness of my attempts to use the iPhone as the web cam for my computer. The most convenient web cam is the one that’s ready to go when you’re almost late to a meeting, not the one you need to fiddle with before signing on. Compared to my 2015 MacBook Pro’s built-in camera, I’d call it comparable. It may be a bit better on some details and maybe a bit worse on color accuracy. I wouldn’t rush out to buy it as an upgrade to an old Mac’s web cam, but it works great on my Mac mini which (obviously) lacks any camera at all.

Neither the 2015 MacBook Pro (left) nor the Mosonth web cam will win imaging awards, but are definitely “good enough” to get you through your next Zoom.

This is a $11 web cam, so everything isn’t perfect. When I tested it on Microsoft Teams meetings, several of my compatriots found me a tad harder to understand on this camera’s built in microphone than my MacBook Pro’s mic or a good external mic. However it works, and if you are like me and often use a Bluetooth headset when video conferencing (hello, AirPods), this is a non issue I almost forget about until said AirPods go dead.

A slightly bigger issue is that the camera’s white balance. To put it nicely, it can be a bit erratic. While people commented on how good the video quality was when it was daytime and my face was lit by a combination of the camera’s light and actual sunlight, the reactions were decidedly less upbeat at night. When I use the camera at night, it gives a sepia toned appearance as if I had an Instagram-style filter turned on. 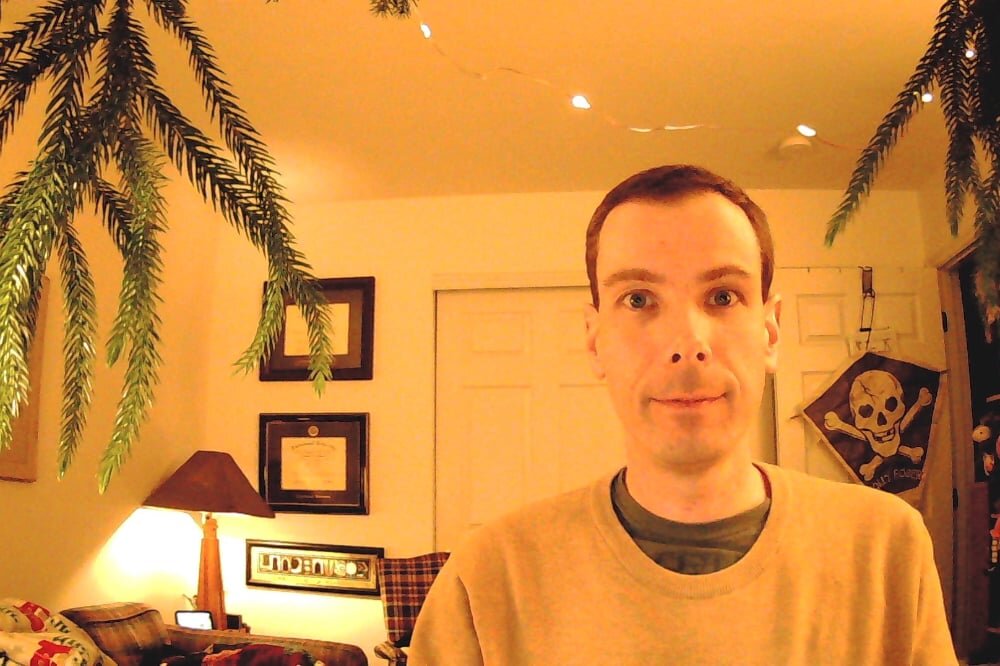 Welcome to the Old West! No, I’m not a trendy “influencer,” just a guy on a web cam with off-balance white balance.

The culprit seems to be two-fold. I like “warm white” light bulbs in my lamps and the camera’s ring light is a “cool” or “daylight” (5200k color temperature) style light. The camera does not seem to be able to compensate very well when the ambient light in the room is a different color temperature than its own built-in light and it made the video look somewhat sepia toned. The fact that the wall behind me is white and thus takes on the warmth of my lamps seems to only confound the little guy worse.

If your room has something other than a white wall behind you, you’ll likely fair much better. So too, if you like daylight-type lightbulbs in your lamps. I tested it in the same room I have configured for live streaming and thus use adjustable color temperature Philips Hue White Ambiance lightbulbs in my light fixtures. A quick change to cool white lighting — something I have preconfigured as an Alexa routine — makes a dramatic difference to the Mosonth’s performance.

So, it is a webcam, it’s cheap and in most situations, it works reasonably well. In others, it is slightly finicky, but still quite workable. As long as you keep in mind its limitations, it’s hard to beat an $11 web cam that works (Mosonth, $11 on Amazon).